Last week Optimizely customers have been able to see a lot of news great and inspiration from Optimizely in the virtual Opticon21 event that went live over three different parts of the world between Tuesday and Thursday. In this blog post, I'll give a summary of what we learned at the event and what's coming from Optimizely in the near future.

“I’d like to start with summarizing the event and what’s coming with one single word - WOW!”

There’s a lot of things brewing at Optimizely – in fact, there was a long time since we as partners (as well as for all customers) had so much to look forward to. To put things into context – what Optimizely has been doing the last few years is broadening their offering to cater for more of a one-stop-shop for central digital services with several new products. While integrations with other systems still play an important role in Optimizely’s eco system, there’s simply more products within Optimizely’s product range where customers can decide if they want to go for Optimizely’s own product/features or if you want to integrate to third party systems that the organization might already be using.

While this has given customers and partners more options to choose from, Optimizely’s core products have not have any major enhancements for a few years – they’ve basically just gotten smaller additions and improvements. However, this year there’s such an array of major improvements that will affect most people working with Optimizely, as customers and partners so that a blog post easily gets overwhelming. In this blog post, I’ve focused on digging a big deeper on what’s closest at hand – while also peeking into the changes that are coming next year.

Optimizely’s Content and Commerce products, including their cloud offering, has been running on .Net Framework since the autumn of 2002. Microsoft released their new technical framework “.NET Core” in June 2016. While this was a totally new and improved platform, the first versions had a somewhat limited feature set compared with the full .NET Framework. With the releases of .NET Core 2 and 3 in 2018 respective 2019, the platform gained the stability and a rich feature set that made it the default platform for many custom .NET projects. However, Optimizely (as well as other major products based on .NET Framework) has had a huge effort in upgrading their platform to .NET Core and in this process, Microsoft also dropped “Core” in the naming and simply went with .NET – sometimes suffixed with the version, currently .NET 5 (and with .NET 6 just around the corner).

While some Optimizely developers might have seen private presentations of the work ongoing for quite some time in different developer meetups, it’s only earlier this year that Optimizely released first a closed beta, and then openly announced their new version of the platform in July this year. In the event, we heard that general availability for new customers will be launched in the end of September. For existing customers, it will be a bit later, since Optimizely want to ensure that they have good enough migration scripts in place to ease the pain of an upgrade. At Epinova, we’ve had a lot of developers playing around with the new version in the beta program and we actually released our first customer live site on the new platform last week.

For anyone that’s followed along the progress of .NET, there’s no surprise that there’s a lot of performance to be gained in using this platform. Built from the ground up with performance in consideration, .Net 5 is simply one of the fastest platforms on the market today. In Optimizely’s own testing with their Foundation starter kit, they have seen performance improvements of up to 1200%. Not only does this speed up your site rendering and thus your visitors experience, but this also speeds up pretty much everything from testing when developing to builds and deploys.

While Optimizely will have the core platform ready for production releases real soon, there’s also a rich eco system to take into consideration. Optimizely’s developer site, world.optimizely.com, states that all the modules that they ship will be upgraded during 2021. If you have or intend to use third party modules, for instance modules in Optimizely’s own Marketplace, you will have to check the availability for these modules from each supplier. I think that it’s likely to assume that popular modules, specifically those in the app marketplace, will be upgraded within a few months. At Epinova, we’ve upgraded most of our modules (both open source and internal) to support .NET 5, while there’s still a few left for us to work with.

Upgrades to the user interface

While Optimizely has mainly focused on the technical foundation to upgrade to .NET 5, the frontend technology used to render the Optimizely CMS admin interface as well as the Commerce Manager application: Webforms, is no longer supported in .NET 5. This is a rather old technology that was mainly used 2002-2012. Since then, a lot has happened to web interfaces which means that the parts that’s been rewritten has gotten a major look and feel upgrade in the process. Another really good side effect of this is that the Commerce Manager as a stand-alone application is no longer needed, but an integrated part of the main user interface. This reduces time and friction for both end users working with the system as well as developers that needs to consider two sites.

Optimizely revealed a few other major improvements that they are working on that we’ll see the coming months or into 2022:

GraphQL is a technology that’s grown in popularity since it was first publicly released by Facebook in 2015. While we’ve worked with and seen several Optimizely solutions that’s use the technology, we think that it’s great that Optimizely adds this as a part of their standard product offering. This will lower the threshold of using this, as well as saving time for site implementation. GraphQL-support is currently in private beta.

Optimizely has had their Content Delivery API available for quite some time as well as smaller but helpful platform features as an ID-mapping service that helps building integrations with third party software. With an Integration Platform that spans over their suite of products, we hope that this will be even easier for core products like the CMS and Commerce parts, but this will also significantly lower the threshold for partners to start using Optimizely´s other existing and potential upcoming new products.

Anyone that’s had their ear to the rails have probably not missed the stir around headless the last few years. While it’s always been possible to do headless with Optimizely (I remember doing an upgrade to the Absolut Vodka site that was using an XML delivery and a Flash frontend around 2004) Optimizely has had their Content Delivery API that’s lowered the threshold for headless style implementations.

In Optimizely Content Cloud 12, there will be a JavaScript API to make it even smoother to fetch content from a content service with a JavaScript based site, for instance using React or Vue. On top of this, Optimizely is adding a content modelling API which means that you can set up and alter content models from whatever programming language that you’d like. Of course, the model first style development with C# will still be supported and will probably still be the main way of implementing solutions since it’s fast to use and it has a very fine-grained way of implementing content and property validation. 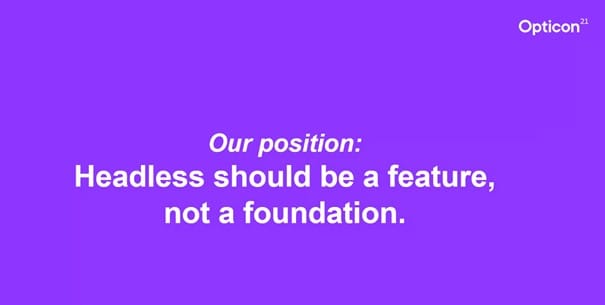 Unified Identity – One Look and Feel

Unified Log in and look and feel. I probably missed out on a lot of the details here, but Optimizely emphasized that they’ll work on an unified Identify to bring a common look and feel over their product suite.

This is something that Optimizely will add for Cloud Customers next year. In their own words: ”Center of the DXP to integrate customer first party data to drive to individual experiences and outcomes.”

As you’ve read in this blog post, there’s tons of things in the makings at Optimizely that will affect how customers and partners work with the platform. Some things, like .Net 5, is ready to be put into action while we look forward of learning more about a lot of the other things that were revealed at the event. 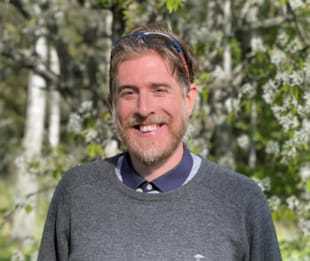